Back in October 2019, Branston Home Guard Social Club celebrated it’s 75th birthday. The Home Guard itself was formed during the early days of the Second World War, when there was a real risk of invasion from Germany and their allies. You can read about the history of the Local Defence Volunteers / Home Guard here.

The following article has been adapted from an article written by Club member Robert Redford for the Lincoln CAMRA magazine IMPALE.

The No 1 Platoon, “E” Company, 1st Kesteven Battalion of the Lincolnshire Local Defence Volunteers (Home Guard) paraded each Sunday morning in the village of Branston. Following two hours of intensive training, then men would retire to one of the village pubs for their Sunday lunchtime pint.

Unlike almost every other important foodstuff, beer was never rationed during the Second World War. However there were shortages because of increased demand and production problems for the brewers. On one fateful Sunday afternoon, the Home Guard volunteers found there was no beer left for them. The outraged Commanding Officer declared that, as the men were putting their lives on the line for their country, something would have to be done.

A search was undertaken for a building that could be used as a mess room, and the first floor of 12 High Street, Branston was selected. The building had previously been a brewery, but the ground floor had been converted into living accommodation. The building, complete with a lady tenant, was duly requisitioned and the Branston Home Guard Club came into being.

The lady tenant was assured that she could stay in her accommodation for her lifetime, as the mess room was accessed by a staircase to the rear of the building and an outside toilet was provided for the Club members.

The first steward was a Home Guard volunteer, Bill Green, assisted by his wife Rose. For the next 50 years Bill ran the Club part-time, in addition to working on a local farm. After the war, the club passed through hard times, there are many wonderful tales that exist from this time.

One such tale regales of a member of the club who worked for a local bus company, turning up in a bus one evening and the members of the club getting their tool kits out and liberating it of all its bench seats. The seats were next seen in the Club building for members to sit on!

The members of the club, not just the Committee worked hard through these times to ensure that the club survived for us all to enjoy today.

In the 1970’s the old lady tenant passed away. The Committee and members came together to raise the finance needed to extend the Club into the cottage. The entrance was moved downstairs and the toilets were installed. A small bar, named at the time as the Lancaster bar was constructed downstairs to complement the main bar.

In the 1990’s the toilet facilities were extensively modernised and were out of action for several months, lady members of the club using the disabled toilet, whilst the men had to use portable facilities in what is now the outside seating area.

In the 2000’s the upstairs bar was completely updated, with new seating and new bar and associated woodwork. The staircase was also replaced during this time to meet modern regulations.

In the 2010’s the global financial crisis hit, and the number of members regularly using the Club has fallen.

Various works still go on voluntarily behind the scenes today in order to keep the club running. The Committee is always interested to hear from members that may wish to become involved in the running of the club.

The Officers and Committee would like to please ask all members to use the Club facilities as much as they can.

A certificate from King George VI, belonging to one of the members of the No 1 Platoon, “E” Company, 1st Kesteven Battalion of the Lincolnshire Local Defence Volunteers (Home Guard) , and a founder member of the Branston Home Guard Club. 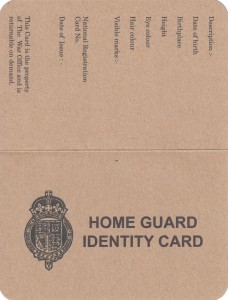 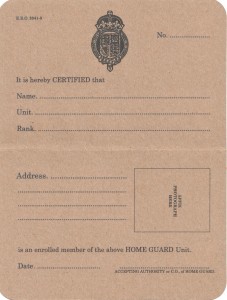 The Identity Card image above is an exact replica of the actual identity cards issued. They are produced by Jon Allen. Jon produces lots of good quality period items and proceeds go to funding trips and activities for people with special needs. Jon and his products can be found on ebay – please click here to see them.

The National Registration Act 1939 was introduced by Parliament at the start of World War II. The Act established a National Register which began operating on 29 September 1939 (National Registration Day), a system of identity cards and a requirement that they must be produced on demand or presented to a police station within 48 hours. Every man, woman and child had to carry an identity (ID) card at all times.

The three main reasons for their introduction: 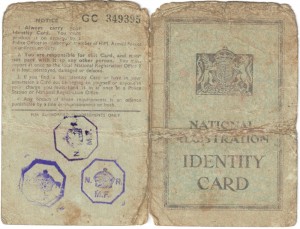 The 1939-45 Defence Medal was a campaign medal of the British Commonwealth, awarded for service in WW2. It was instituted to recognise both military and some types of civilian service – including the Home Guard. To qualify members of the Home Guard had to complete 1080 days (approximately three years) service. 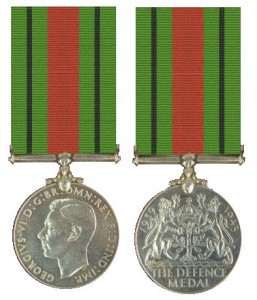